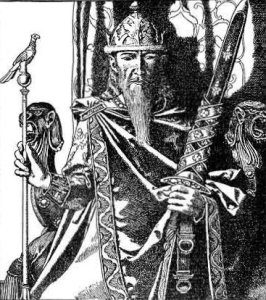 The legend of King Lucy has long been associated with the area – a small local Iron Age earthwork is traditonally known as Lucy’s Castle and a much weathered medieval statue that currently stands outside the church of St Dymphna’s is commonly called King Lucy or King Luck and touched for good fortune.

The King himself is mentioned in Malory’s Morte D’Arthur as one of the court at Camelot and the story is briefly mentioned by Holinshed and referenced by Ben Jonson. But the fullest retelling comes in Ranulph Williams’ novel ‘The Labyrinthine King’ where it forms the centrepiece of his modernisation of the Arthurian myth.

King Lucy, convinced of the fickleness of women, wished for a woman as constant and reliable as the seasons. His wish was granted by a cunning wizard who created for him a bride made entirely of the flowers of spring.

The King made the Woman of Flowers his queen, but, as the seasons changed, so did she, falling in love not with the King but with the wizard, her creator.

Betrayed, the King swore to destroy not just his unfaithful wife, but the seasons themselves, laying waste to his kingdom and everything in it green and growing until nothing was left.

In the midst of this devastation nothing can survive and the kingdom itself is on the verge of destruction until the wizard, overcome by grief, kills himself over the body of his dead love.

The wizard’s blood revives the Woman of Flowers and with her revives nature itself. the king forgives her, she returns to her role as queen and order is once more restored.

Although Williams has embroidered greatly on the existing glimpses of the story, it is now his telling that has become the most common version in the local area.